Skip to content
On 21st June, 33 Year 8 Latinists visited the beautiful auditorium at Corpus Christi College to perform scenes from Ancient Greek comedies which they had chosen and adapted.

Eight groups worked on scenes from Aristophanes’ Frogs, Birds, Clouds and Peace (from scripts translated and adapted by Graham Kirby), making their own props and costumes, as well as producing their own posters and TV trailers for the plays! You can see their posters and watch their trailers on this blog – each play has its own page.

The Dionysia was an annual drama festival in Ancient Athens in honour of the god Dionysus, where playwrights put on competing plays, and the winning play won a goat.  Our fourth annual Dionysia began with a rousing introductory talk by Professor Fiona Macintosh, Director of the Archives of Greek Drama at the University of Oxford. Fiona explored the modern parallels with the plays, and then the groups introduced their plays to the audience, which included supporting family and friends, showed their posters and trailers, and then performed their chosen scenes. 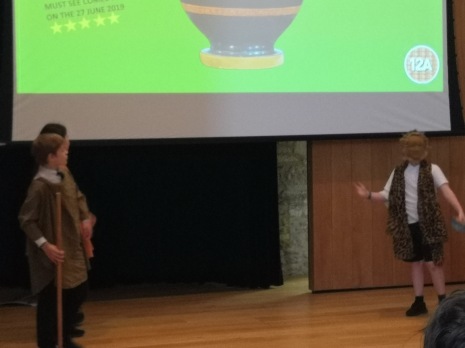 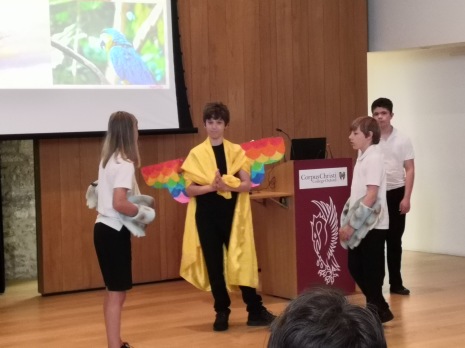 oznor
The plays featured lively and colourful choruses of birds and clouds, two dead poets competing in the Underworld, an argument between the “Right” and “Wrong” argument at Socrates “Thinkery”, and a giant dung beetle (in the form of a rusty trolley) being ridden to a deserted heaven!
After the performance, the audience were able to enjoy some non-alcoholic cocktails and snacks, while Fiona chose winners for various categories, including best overall play and runner-up, best actors and best set/props.

There was then a very enjoyable performance of a scene in Frogs by Found in Translation theatre company, featuring the scene where Dionysus, dressed as Hercules, attempts to get the real Hercules to help him get to the Underworld. 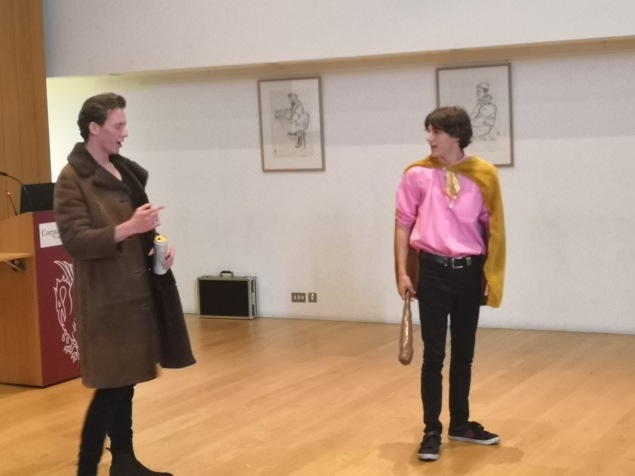 oznor
Finally, Fiona announced the winners, with the overall winners each receiving (fluffy) goats, and everyone else receiving some edible prizes.

dav
We are very grateful to Corpus Christi College for providing such a perfect venue for the plays, to Fiona for her talk and judging, and to Found in Translation for their entertaining performance.