Last week we invited Year Fives from East Oxford Primary to the Iris Classics Centre at Cheney to attend a feast of the gods! There were two long tables laid out with place names, menus and various items. One table, with black table cloths, represented some of the chthonic (underworld) gods and creatures, whereas the other table, with white table cloths, represented the Olympians. 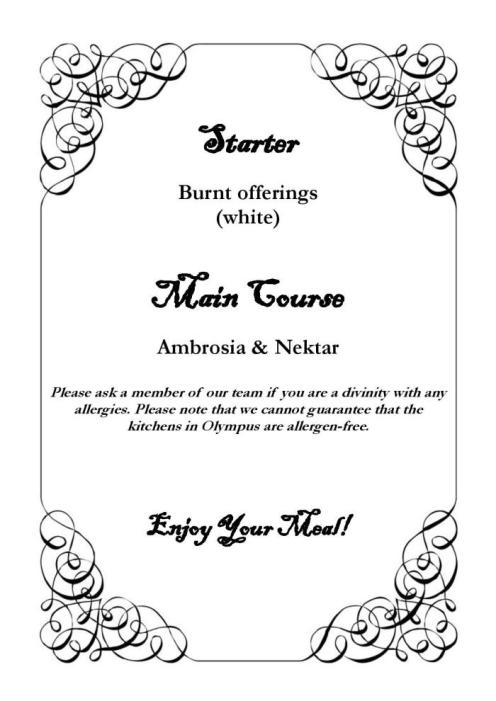 Everyone (including teachers!) was assigned a character and asked to take a seat. They then introduced themselves to their dinner guests while being served food and drink by Year Eight classics students. On the chthonic table, which was much longer than the Olympian table, they were introduced to familiar chthonic characters such as Hades, Cerberos and Tartarus, as well as much less well known beings, such as Empusa, the Greek ‘bogey monster’, the Lamiae, vampiric creatures who disguised as beautiful women, Melinoe, a half-black, half-white creature who led ghosts out of the underworld to haunt people, the Furies, the Fates, Thanatos, the Keres, who tore the souls of the dying out of their bodies, and many others.

The Olympian gods were often described by Homer and others as consuming two substances: ambrosia and nektar. Both of these words mean ‘undying’ at their root. Both substances are described as fragrant. We also looked at some examples of gods who transcended the Olympian / Chthtonic categories. Demeter, Zeus and Hermes all had underworld associations.

We then explored how to get into the Underworld, and the Year Fives took part in two activities – making an obol (ancient Greek coin) to pay Charon, the ferryman, and making an Orphic tablet, which was a sort of ‘passport to the underworld’. Finally, Year Eight classics students performed the story of Orpheus and Eurydice, using the classics centre’s newly acquired lyre, and some very comedic and expressive acting.

We were delighted to welcome the Year Fives, and very grateful to the Year Eights for their performance, and for serving the gods with food and drink!